THE PEOPLE BEHIND THE PVA-PPE GROUP

The PVA-PPE Group is headed by Paul Varnsverry and Kathryn Chen.

Paul Varnsverry, first became involved with the preparation of product standards in 1984. With an involvement in manufacturing protective clothing for racing motorcyclists, Paul was regularly consulted by the governing body of motorcycle sport in the UK: the Auto-Cycle Union.

Paul Varnsverry's work with the ACU expanded to incorporate his involvement with a technical subcommittee responsible for the drafting of a standard for competition clothing for motorcyclists. This standard was not implemented, but many of its doctrines can be found in European Standard EN 13595, which was published in 2002.

Paul has been involved in the development of the European standards for protective motorcycle clothing through his membership of both British Standards Institution (BSI) subcommittee PH/3/9 - in which capacity he was Principal UK Technical Expert - and Comité Européen de Normalisation (CEN) committee TC162/WG9; including his role as leader of the WG9 Project Group charged with the responsibility of finalising European Standard EN 13595 Parts 1 to 4 for motorcyclists' jackets, trousers and suits.

Whilst Paul Varnsverry's work in the field of design, development, testing and certification of motorcyclists' clothing is well known and respected, his work with a variety of other industries should not be overlooked.

Football player's shinpads, horse riders' body protectors, helmets for cyclists, helmets and impact protectors for roller-sports, and personal defence equipment for police officers are other areas where Paul Varnsverry maintains an interest and an involvement. In 1998, he proposed a new BSI work item covering protective clothing and equipment for use in violent situations and in training by police, prison officers, security officers, bullion handlers, couriers, nursing staff in secure mental institutions and others facing threats of physical violence in the course of their employment.

This proposal was made following the publication of the "Police (Health and Safety) Act 1997; which brought the UK's serving police officers within the scope of UK Health and Safety at Work legislation for the first time. No official standards were available for protective equipment manufactured for these user groups (although advisory technical specifications have been produced in some cases) and Mr. Varnsverry identified a very real need for authoritative standards which would be of benefit to end users, purchasers and manufacturers. Since many civilian employers and employees also choose items of protective clothing and equipment selected by the police and military - because the threats they face in their employment may be similar - these standards have a far broader range of appeal that might initially appear to be the case. Mr. Varnsverry was Chairman of the BSI committee responsible for this work programme for over 15 years and is still regularly consulted for advice on equipment specifications by police, military and other agencies both in the UK and overseas.

Mr. Varnsverry was also appointed to the "Market Surveillance Task Group", which investigated fraudulent claims by manufacturers and importers, and contraventions of the PPE Directive; and which liaised with legislative bodies and enforcement agencies Europe-wide to improve their responses to such transgressions. The PPE legislation is a highly technical subject area which, in many cases, has by their own admission been beyond the comprehension of the enforcement authorities, which has hindered their ability to respond.

Mr. Varnsverry was also a specialist advisor to the Association of Chief Police Officers of England and Wales (ACPO) Motorcycle Project Group – a subcommittee of the ACPO National Uniform Project Group – from 2002 until it was disbanded in 2010, as a result of government funding cutbacks, and drafted the technical content for the national operational requirement for police motorcyclists’ protective clothing.

Mr. Varnsverry regularly lectures both within the UK and Internationally, to both civilian and non-civilian audiences, including:

Mr. Varnsverry has also written on developments in the field of motorcyclists’ clothing in “Textiles for Protection” (Woodhouse Publishing; ISBN-13:978-1-85573-921-5)

Speaking on his work in the field of CE marking of PPE and product standards, Paul Varnsverry commented: "Consultation, dialogue, research and understanding are all issues to be covered if product development is to provide the client and the consumer with products which are fit for purpose. Through this philosophy, the PVA-PPE Group strives to provide its clients with formidable levels of service. Our clients keep coming back to us with new projects, and we are reassured by the constant stream of referrals which we continue to receive, which suggests that our approach to business – both ours and that of our clients – is the right approach."

With The British Safety Industry Federation and the British Standards Institution 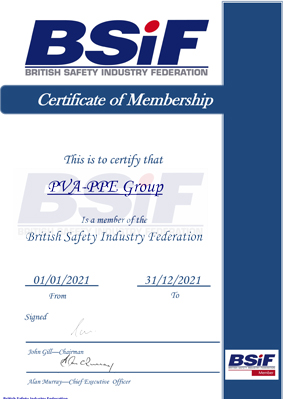 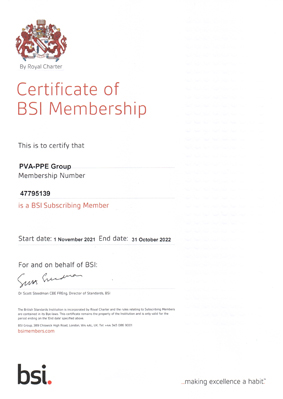 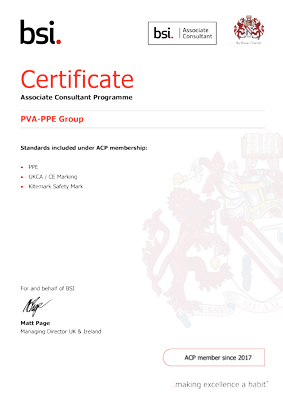